Chilean fans of the series will be able to access content from the series exclusively in 8K resolution on Samsung televisions, which debuts on September 2. There are also other highly anticipated series that could even be seen in improved quality, thanks to the Upscaling function of NeoQLED TVs. 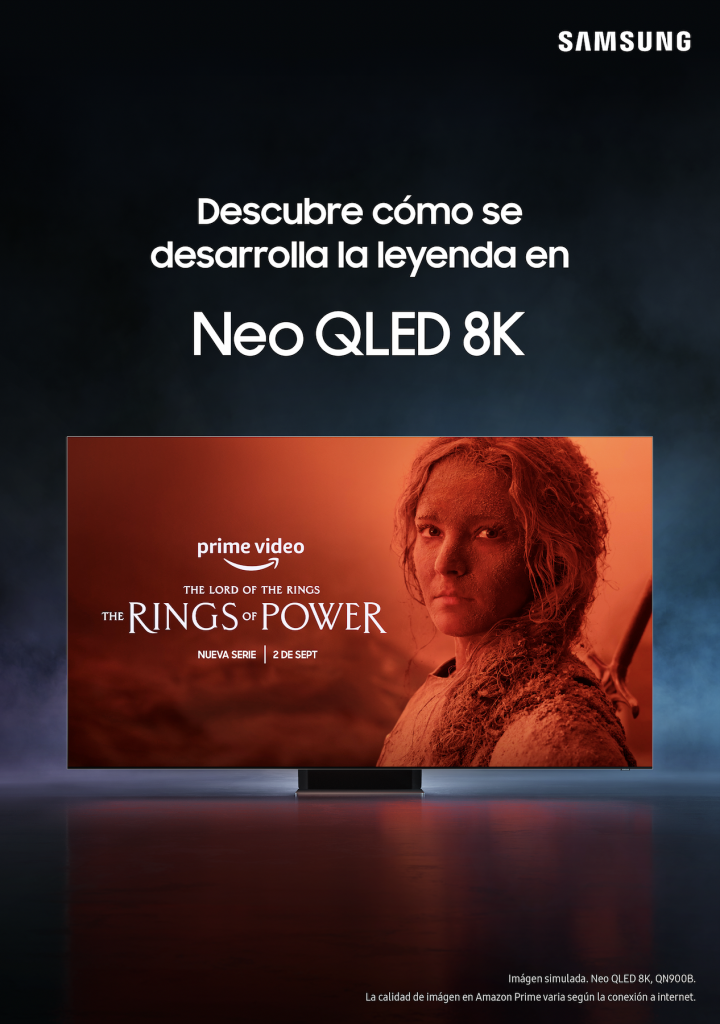 Samsung has announced a collaboration with Prime Video that offers fans the opportunity to experience exclusive 8K content from the long-awaited “The Lord of the Rings: The Rings of Power only on the latest generation screens from Samsung.

Prior to the series premiere on September 2 on Prime Video, old and new fans of the Tolkien saga in Chile will also have early access to exclusive content only with Samsung.

On August 24, in New York City, Samsung held an exclusive preview screening event featuring 25 minutes of content from the first two episodes of the series on its three-story LED video wall at Samsung 837 – your flagship experience center.

Samsung will be the first to offer content from the series in 8K resolution through a personalized preview with exclusive scenes. Viewers will have the opportunity to experience the epic journey in depth and detail unimaginable in the Samsung Neo QLED 8K TVs. Opportunities for fans to access the exclusive 8K trailer will be announced soon.

“Collaborations like this mark an important milestone in bringing 8K – the most premium display technology – to the forefront for viewers,” said Patricia Osorio, TV Product Manager at Samsung Electronics Chile. “For the first time, fans can experience the stunning visuals of The Lord of the Rings: The Rings of Power on Samsung Neo QLED 8K TVs,” he added.

“As we consider how to immerse our global fans in the world of The Lord of the Rings: The Rings of Power, exceptional technology and Samsung displays feel like a natural match,” said Andrew Bennett, Vice President of Global Device Partnerships at Prime Video. “The depth, detail and Samsung’s incredible passion for the series have taken us on an incredible journey together, one we can’t wait for audiences to experience.”

A leader in the development of 8K display technology, Samsung’s Neo QLED 8K Series TVs offer the most immersive and realistic home entertainment experience available today. Whether it’s the breathtaking views of Moira, the majestic forests of Lindon, the capital of the elves, or the stunning island kingdom of Númenor, fans can experience the Second Age of Middle-earth in pristine 8K resolution thanks to the Samsung’s Artificial Neural Quantum Processor 8K Intelligence while they’re immersed in the action thanks to Dolby Atmos sound system and Object Tracking Sound – a Samsung technology that follows the action on the screen.

Other releases: House of the Dragon

There are also other recent releases that have been highly anticipated by fans that can already be enjoyed in 4K quality. This is House of the Dragon, which has kept Game Of Thrones (GOT) fans waiting, who in addition to being able to enjoy the resolution of NeoQLED TVs in 4K, will be able to test their ability to play content in 8K and their Upscaling function that improves those contents that are not in 8K resolution.

With Upscaling, the TV is capable of improving the image quality of any content regardless of its original resolution and displaying it as if it were native 8K content, so you can enjoy classic movies or your favorite series with even better detail and colors incredible in a high resolution panel. This is achieved from the Neural Quantum 8K processor. This powerful artificial intelligence system, instead of using a single neural network, as in conventional LEDs, introduces the Multiple Intelligence Neural Network, made up of 20 neural networks, each one specialized in a certain category of upscaling.